Understanding and Prosecution Strategies for Complying with the USPTO Myriad Guidance

On March 4, 2014, the USPTO issued its Guidance (guidelines) on subject matter eligibility under 35 U.S.C. § 101 in view of the recent Supreme Court decisions of Association for Molecular Pathology v.Myriad Genetics, Inc. (2013) and MayoCollaborative Services v. Prometheus Laboratories, Inc.  (2012).  However, the current version of the Guidance limits the types of patentable subject matter beyond what is required in Myriad and Mayo.

The March 2014 Guidance superseded a June 13, 2013 memorandum to the USPTO Examiner (in view of Myriad).   The March 2014 Guidance is stated to also take into account other Supreme Court decisions including Diamond v. Chakrabarty (1980), and the Examples use the fact scenarios and holdings in cases such as Funk Bros. Seed Co. v. Kalo Inoculant Co. (1948).

The 2014 Guidance has the following four sections:

Part II – explaining how to determine whether the claim as a whole recites eligible subject matter (something significantly different than a judicial exception);

Part IV – providing a new form paragraph to be used when rejecting claims in accordance with this guidance.

The Guidance presents the following flow chart in Part I: 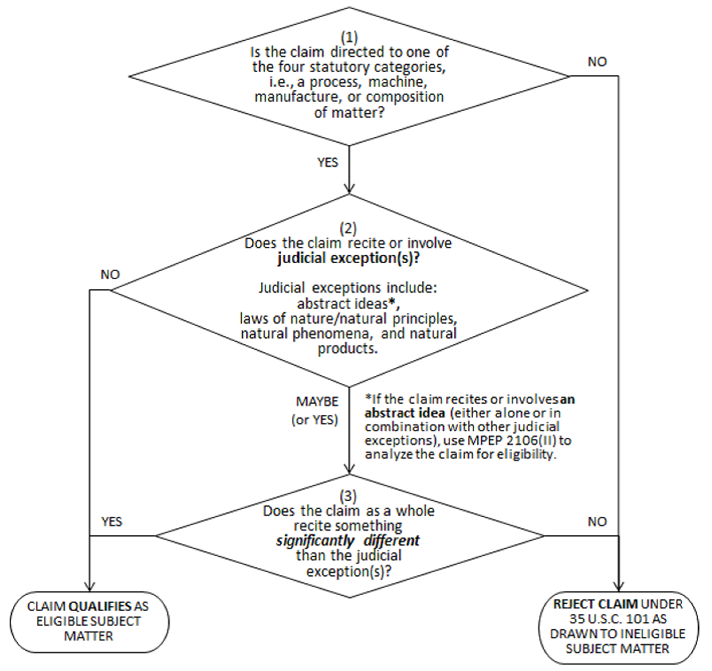 Thus, the Guidance sets out a three-part test for Examiners to follow to determine patent-eligible subject matter.

Assuming that the answer to Questions 1 and 2 are “Yes” (or “Maybe” for Question 2), the third and probably the more central question in the Guidance is Question 3, which is: “Does the claim as a whole recite something significantly different than the judicial exception(s)?” Question 3 uses a factor-based analysis of “significantly different” as discussed in Part II.

However, determining whether a claimed invention is “significantly different” requires a weighing of 12 factors, which is similar to a weigh of the Graham factors for an obviousness analysis (under § 103) or the Wands factors for an enablement analysis (under § 112(a) or § 112, first paragraph).  As stated in the Guidance, factors that weigh toward eligibility (“significantly different”) are divided as a)-f):

f) Claim recites one or more elements/steps in addition to the judicial exception(s) that add a feature that is more than well-understood, purely conventional or routine in the relevant field.

The factors that weigh against eligibility (“not significantly different”) are divided as g)-l):

g) Claim is a product claim reciting something that appears to be a natural product that is not markedly different in structure from naturally occurring products.

j) Claim recites elements/steps in addition to the judicial exception(s) that are well-understood, purely conventional or routine in the relevant field.

l) Claim recites elements/steps in addition to the judicial exception(s) that amount to nothing more than a mere field of use.

B.      Concerns of the Application of the Guidance from Examiners

The Guidance states that terms like “isolated” or “purified” will not suffice for patent eligibility, where Example B contains such a claim.  Example B presents Claim 1 of “Purified amazonic acid.”  The facts include how purified amazonic acid is structurally identical to the amazonic acid in the leaves.  In applying the various factors, the Guidance explains that “… the claim as a whole does not recite something significantly different than the natural product, e.g., the claim does not include elements in addition to the judicial exception that add significantly more to the judicial exceptions, and also does not include features that demonstrate that the recited product is markedly different from what exists in nature.”

But a concern here is that a structural difference from the natural product is needed for claim 1 to satisfy § 101, where reciting “isolated” does not make claim 1 eligible subject matter.  It is believed by some that this was not the holding in Myriad or Mayo.  For instance, in Myriad, the BRCA1 gene had been defined in terms of its informational content (as encoded in the gene), and there was no alteration of the genetic (chemical) structure of the DNA. The USPTO Example does not take into account the function or use of the claimed subject matter, or what was needed to isolate the amazonic acid from nature.  The analysis of a function or use resides in previous Supreme Court and other federal case law.  Thus, there is a question whether the claimed subject matter as a whole is truly being analyzed here.

At the same time, the amazonic acid example in the Guidelines could be read to suggest that a method of treatment claim using a naturally existing product can only be eligible if the claim also recites some dosage limitations.

A problem with the various Examples is that a really broad claim 1 is presented, followed by a very narrow dependent claim.  The applicant will want to know what happens when the claim scope is in between the two such claims (sort of a grey area).

On May 9, 2014, the USPTO heard comments from the public, which continues to be critical of the Guidance going too far and overreaching of the holdings in the Supreme Court decisions. A copy of the agenda from the USPTO can be found here: http://www.uspto.gov/patents/announce/forum-agenda_20140509.pdf.

Although the Guidance given to USPTO Examiners does not have the force of law, patent applicants are now placed in a position of defending against such rejections under § 101, possibly unnecessarily narrowing the scope of claims in an attempt to get allowance, and at the same time likely creating unnecessary prosecution history estoppel which affects the patentee’s rights in enforcing the issued patent.

Further, Myriad is expressly limited to claiming “isolated DNA” and does not extend to “method” claims or even other “applications” employing the isolated DNA; but the Guidance extends to pharmaceutical compositions containing a natural product, methods of treatment employing a natural product, etc., including purified natural products or combinations of natural products which exhibit completely different characteristics and properties in contrast to when these products are found in their natural state. The Supreme Court in Myriad criticized the claims as being directed to information, and the holding was rather limited as expressly stated in the opinion. For instance, as stated towards the end of the decision: “Nor do we consider the patentability of DNA in which the order of the naturally occurring nucleotides has been altered. Scientific alteration of the genetic code presents a different inquiry, and we express no opinion about the application of §101 to such endeavors. We merely hold that genes and the information they encode are not patent eligible under §101 simply because they have been isolated from the surrounding genetic material.”

Also, Funk Bros. is a decision that must be interpreted very narrowly. The USPTO suggests that this case supports the proposition that subject matter constituting natural products or combinations of natural products is not patentable. However, the claim in Funk Bros. was directed to: “A … plurality of selected mutually non-inhibitive strains of different species of bacteria of the genus Rhizobium, said strains being unaffected by each other in respect to their ability to fix nitrogen in the leguminous plant for which they are specific.” The claim fails to recite any feature that would cause the plurality of bacteria to function any differently than in nature, i.e., no limit concerning purification/concentration or even the type of bacteria. Funk Bros. adds nothing to Myriad and simply does not support the USPTO’s broad interpretation.

Chakrabarty was really focused on whether a man-made living organism could be patented; not on the fact that that bacteria were “markedly different” from the wild type form.

The USPTO should eliminate the “weighing factors” test they have come up with and instead review patent claims “as a whole” taking into account whether the claimed subject matter exhibits a “characteristic” (structure or function) that differs from the natural product in its natural state. Thus, a claimed pharmaceutical composition containing purified amazonic acid together with a natural excipient/preservative, assuming that the composition exhibits a pharmaceutical property, is subject matter eligible since the unpurified form could not effectively exhibit such a property.

There is a chance the USPTO might amend the Guidance materials to include functional differences as a basis to overcome a § 101 issue, rather than just focus on structural differences.  But the USPTO in all probability will not pull back in large measure, as the USPTO thinks they basically got it right in trying to follow the Supreme Court cases, including the recent Federal Circuit decision of In re Roslin Institute which confirms their basic position.

The USPTO has set June 30, 2014 as a deadline for receiving comments from the public on the Guidance. If the USPTO refuses to modify the Guidance to significantly reduce the scope of the now expansive limitations on subject matter eligibility, such as for example taking into account the functional features of an isolated or purified natural product that is encompassed by a properly drafted patent claim, it is still possible to emphasize to Patent Examiners and the PTAB that the Guidance is merely advisory policy and does not rise to the level of even federal regulatory rules. At worst, it may be necessary to await future PTAB or court decisions in order to obtain certain patent claims.

Most applicants are likely not going to wait for such a court decision.  Most applicants are more interested in getting the quicker Notice of Allowability without going through a lengthy and expensive appeal process.  In the meantime, it may be necessary to pursue method-of-use patent claims and other types of patent claims that comply with the Guidance.  If an applicant wants a product claim, and if a claim is directed to “isolated” or “purified” (including a functional language definition), “recombinant”, etc., then an applicant (as just one example) can consider giving a percentage of purity or range thereof, which would better support the argument that the claimed invention is markedly different in structure from a naturally occurring product.  It is also advisable to have narrower “back-up” claims now in the event that an appeal from the Examiner’s rejection becomes necessary, or if a federal court does in fact agree that the USPTO Guidance is correct, or not incorrect.