Interestingly, for two of the proceedings, Congress moved away from the “substantial new question of patentability” (“SNQ”) and adopted two new and seemingly-similar threshold standards.

For ex parte reexamination and the new Supplemental Examination the petitioner must show that an SNQ exists.4

For current inter partes reexamination5 and future inter partes review (“IPR”) the petition and any patent owner response, together, must show that there is a “reasonable likelihood” that the petitioner would prevail with respect to at least one of the claims challenged in the IPR petition.6

For Post-Grant Review (“PGR”) proceedings, the petitioner must show that it is “more likely than not” that at least one challenged claim is unpatentable.7

Thus, the question arises: are these standards merely semantics of the SNQ standard or are they different in a way that would actually affect the grant of the respective proceeding?  According to the AIA and legislative history the threshold standards are intended to have graded differences as represented in the basic chart below. 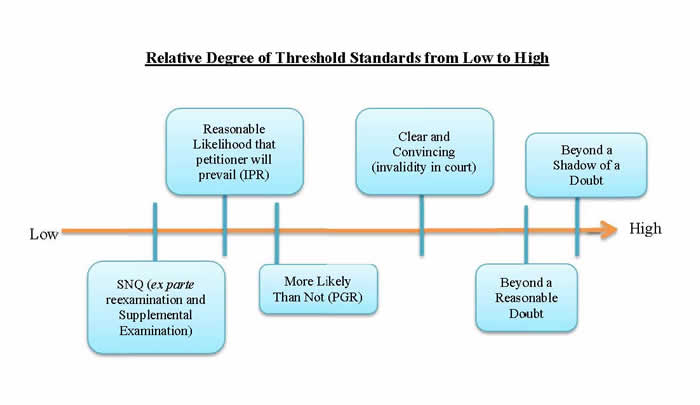 The substantial new question of patentability standard still applies to ex parte reexamination and will also apply to Supplemental Examinations.  The USPTO will find an SNQ exists where there is a substantial likelihood that a reasonable examiner would consider the prior art patent or printed publication (or “item of information” if the request is for a Supplemental Examinations8) important in deciding whether or not the claim is patentable.9

Historical statistics reported by the USPTO reveal that 92% of all ex parte reexamination requests have been granted from July 1, 1981 to September 30, 201110 and 95% of all inter partes reexamination requests have been granted from November 29, 1999 to September 30, 2011.11  It is generally accepted that the SNQ standard requires showing that is less than a prima facie case of unpatentability and not difficult to satisfy.  As Judge Paul Redmond Michel, former Chief Judge for the Court of Appeals for the Federal Circuit, testified to the House of Representatives: “Any patent lawyer worth his salt can raise a substantial new question in virtually every case.”12

With the enactment of the AIA on September 16, 2011, the SNQ standard applicable to inter partes reexamination was immediately changed to “reasonable likelihood” of successful challenge with respect to at least one claim.13  Satisfaction of this threshold standard depends on a review of both the petition for review and the patent owner’s response to the petition.14  In its “Changes to Implement Inter Partes Review Proceedings,” the USPTO did little to clarify what this standard requires except to state that “[a] reasonable likelihood standard is a somewhat flexible standard that allows the judge room for the exercise of judgment.”15 Although the USPTO has been quick to implement this new standard, a precise definition is yet to be (and, likely, never will be) promulgated, despite pleas for clarity and guidance.16

IV.  “More Likely Than Not”

PGR will be available to challenge a patent that issues under the AIA’s new first to file rules.19  Challenges must be brought within nine (9) months of issuance and may be based on any ground that could be raised under 35 U.S.C. §§ 282(b)(2) or (3), 102, 103, 101 and 112, with the exception of compliance for best mode.20  The standard for granting a petition for PGR is whether the petition demonstrates that it is “more likely than not” that at least one of the claims challenged in the petition is unpatentable.21

Similar to its explanation of what constitutes a “reasonable likelihood,” the USPTO provided little more than a restatement of the standard enacted by Congress.  Proposed Rule §42.208(c) provides that the Patent Trial and Appeal Board may institute PGR  if the more likely than not standard is met.22

In response to numerous comments requesting clarity between the two standards for IPR and PGR,23 the USPTO’s Chief Judge of the Board of Patent Appeals and Interferences, James Donald Smith, issued a statement explaining that the two are, in fact, different standards.24  Judge Smith explained that the “reasonable likelihood” standard is lower than the “more likely than not” standard: “The reasonable likelihood standard allows for the exercise of discretion but encompasses a 50/50 chance whereas the “more likely than not” standard requires greater than a 50% chance of prevailing.”

Judge’s Smith’s explanation is consistent with the legislative history.  Senator Kyl explained that the standard of review for PGR is higher than the “reasonable likelihood” standard for inter partes review because “some of the issues that can be raised in Post-Grant Review, such as enablement and section 101 invention issues, may require development through discovery.  The Office wants to ensure that petitioners raising such issues present a complete case at the outset.”25 [Emphasis added.]  Senator Patrick Leahy (D-VT) explained that a substantial new question would not be enough to initiate PGR and “the new higher standard . . . was created to make it even more difficult for these procedures to be used as tools for harassment.”26

Thus, while it appears that the “more likely that not” standard is a higher threshold than “reasonable likelihood,” whether this standard presents a legitimate obstacle to obtaining PGR can only be determined once PGR is available and the standard is tested by petitioners.

From the descriptions provided by the USPTO and the legislative history, the three standards have graded thresholds with SNQ being the lowest and “more likely than not” being the highest.  This should mean that the petitioners for IPR and especially PGR will have higher burdens to meet, versus an ex parte reexamination, just to start the post-grant proceeding.  How the new standards of “reasonable likelihood” and “more likely than not” affect the grant rate of requests for IPR and PGR, respectively, remains to be seen.