As of October 2, 2014, the Patent Trial and Appeal Board (“PTAB”) has updated the statistics of the number of inter partes reviews (“IPR”), post-grant reviews of covered business method patents (“CBM”), and derivation proceedings (“DER”) that have been filed. These stats are shown below, and can be found at:

It is worth noting that the first regular PGR (not for CBM) was filed on August 5, 2014. As shown below, there are now 2 PGR petitions that have been filed.

The PTAB determines whether or not an IPR or PGR will be granted.  The PTAB may not authorize the IPR unless the petition and response shows there is a “reasonable likelihood” that the petitioner would prevail with at least one of the challenged claimed.[1] The granting of a PGR trial requires an initial threshold requirement of “more likely than not”, and is slightly higher than the IPR threshold standard. However, the latest statistics clearly show that the initial threshold has been met the majority of the time (see the AIA Trials Instituted/Disposals chart below). Note that the new fiscal year (2015) for the USPTO has started. The number of AIA Petitions, where 1,406 IPR petitions have been filed, is as follows:

The graphic form of the AIA filings is shown below (note the decreased filing from Jan – March this year, but a surge in April 2014): 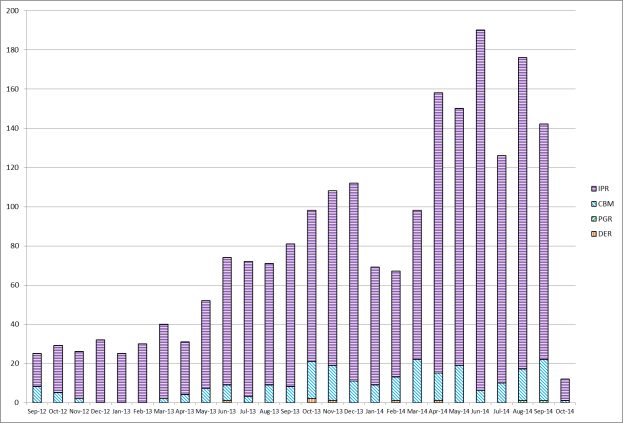 71.2% of the IPR and CBM petitions filed are in the electrical/computer arts, and 5.8% (slight increase from 5.2% about a month ago) are in the biotechnology/pharma arts. The number of petitions for design patents has not changed in a while. The petitions by technology breakdown are: 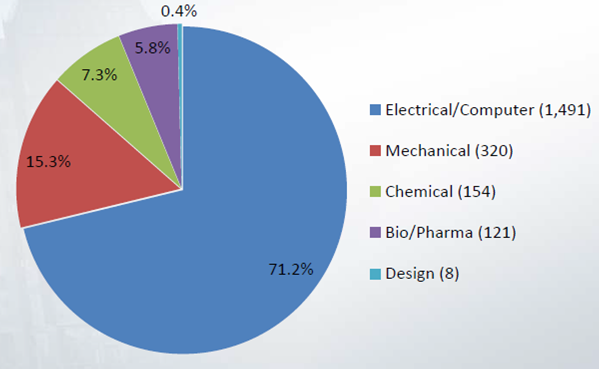 The institution rate now includes fiscal year 2015 as shown below. Note that there are already 4 cases of joinder in 2015.

+30 cases joined to 28 base trials for a total of 46 cases involved in joinder. 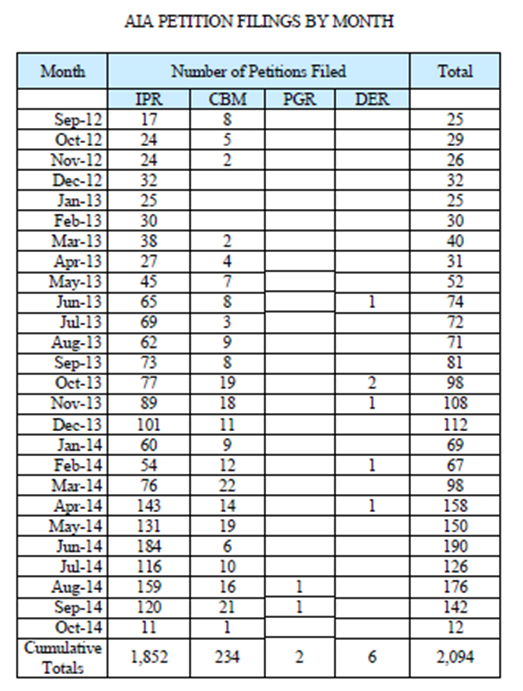