As of May 14, 2015, the Patent Trial and Appeal Board (“PTAB”) has updated the statistics of the number of inter partes reviews (“IPR”), post-grant reviews of covered business method patents (“CBM”), regular post-grant reviews (“PGR”) and derivation proceedings (“DER”) that have been filed. These stats are shown below, and can be found at:

It is worth noting that the first regular PGR (not for CBM) was filed on August 5, 2014. As shown below, there are now 6 PGR petitions that have been filed (1 has been filed in the last month). This should ramp up when more and more patents qualify (must be a first-inventor-to-file patent).

For the first phase of an AIA trial, the PTAB determines whether or not an IPR, PGR or CBM will be granted. The PTAB may not authorize the IPR unless the petition and response shows there is a “reasonable likelihood” that the petitioner would prevail with at least one of the challenged claimed. The granting of a PGR/CBM trial requires an initial threshold requirement of “more likely than not”, and is slightly higher than the IPR threshold standard. However, the latest statistics clearly show that the initial threshold has been met the majority of the time (see the AIA Trials Instituted/Disposals chart below). Note that the new fiscal year (2015) for the USPTO started on October 1, 2014. The number of AIA Petitions, where almost 2,900 IPR petitions have been filed, is as follows: 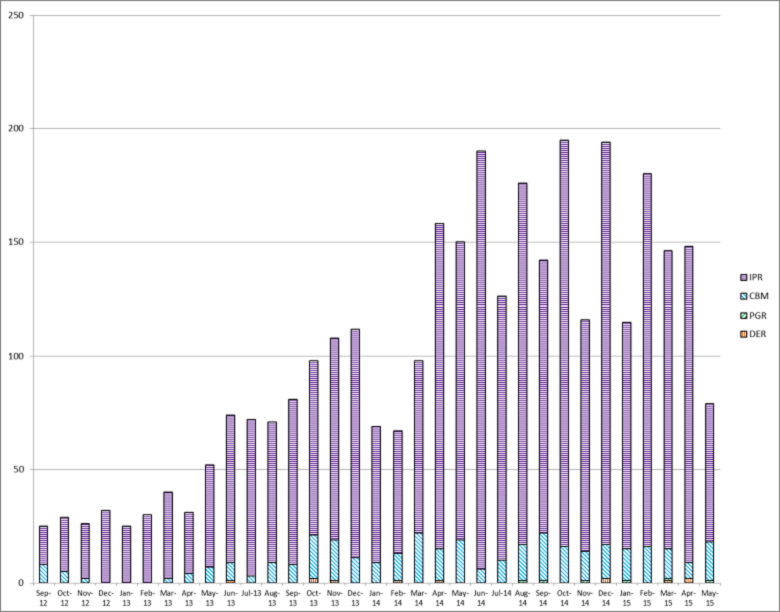 For the last fiscal year, the petitions by technology breakdown are (bio/pharma has increased, partially due to the hedge fund filings attacking pharmaceutical patents):

The pie chart for these filings are as follows (almost 2/3 in electrical/computer arts): 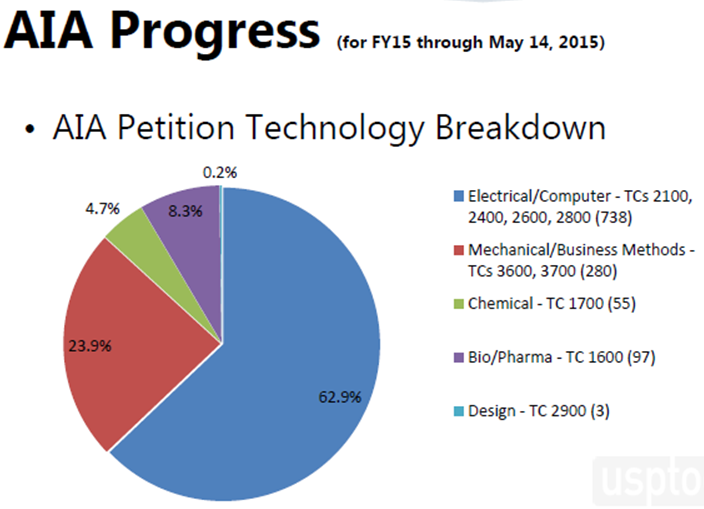 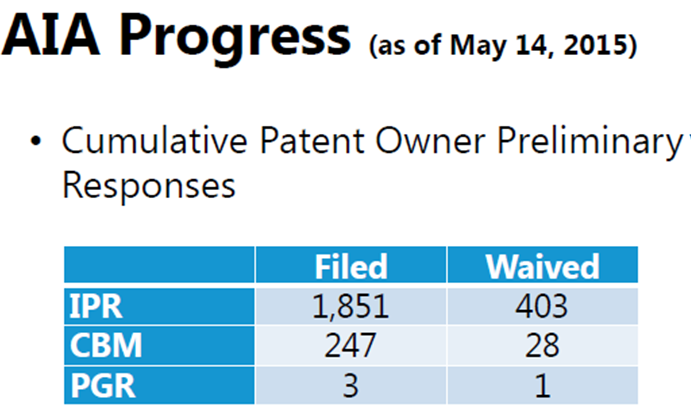 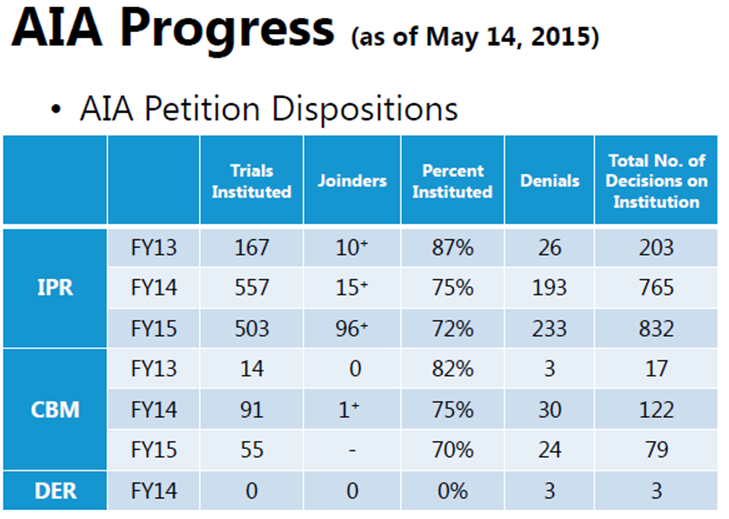 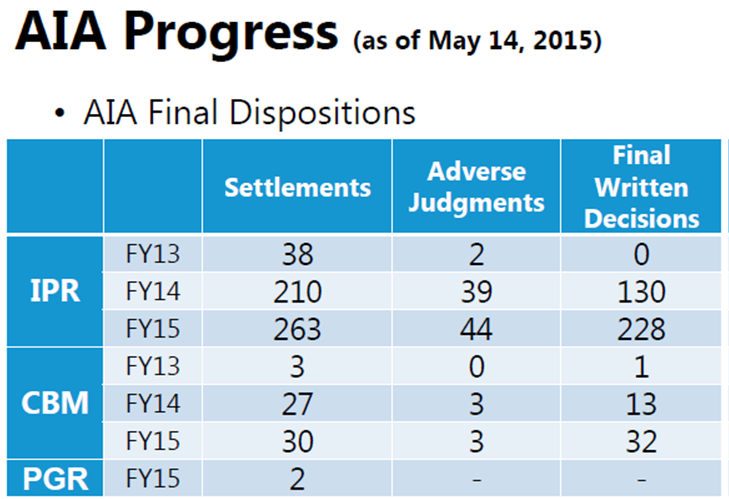 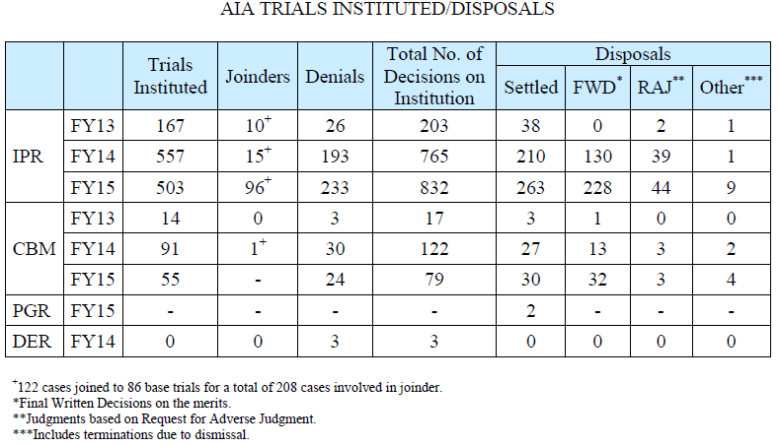 The USPTO also releases the following graph related to how many claims are challenged, instituted, and found unpatentable (cancelled) in IPRs (as of 04/30/2015), where 937 Petitions were surveyed: 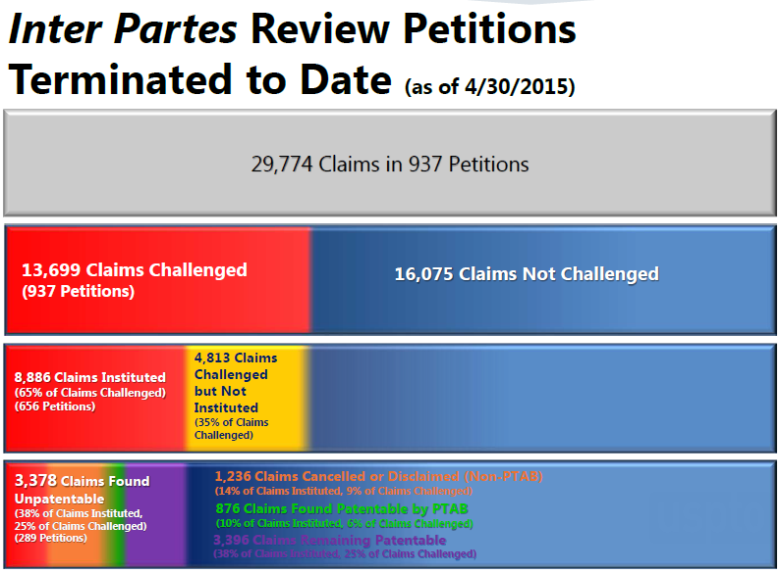 The USPTO provides the following table where the trend in filings can be seen here (not the upward trend since April 2014 and overall steady since then): 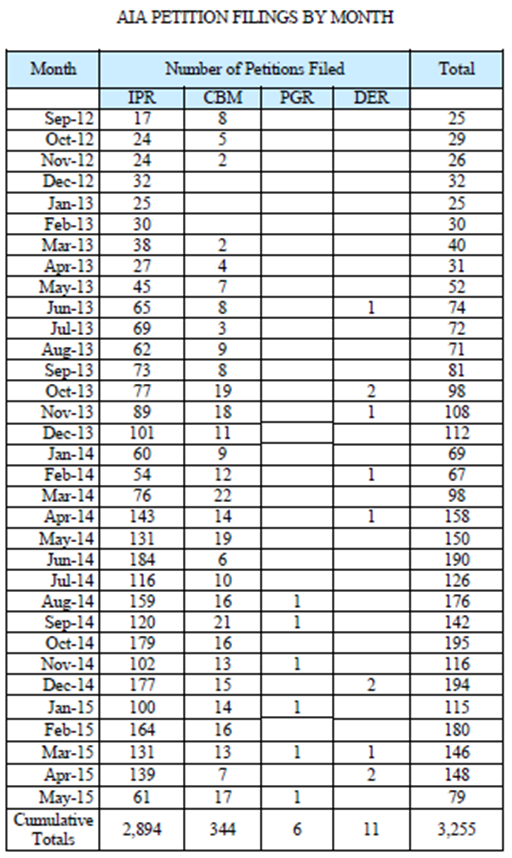