As of February 28, 2017, the Patent Trial and Appeal Board (“PTAB”) has updated the monthly statistics of the number of inter partes reviews (“IPR”), post-grant reviews of covered business method patents (“CBM”), regular post-grant reviews (“PGR”), and derivation proceedings (“DER”) that have been filed. These stats on progress are shown below, and can be found at:

The first regular PGR (not for a CBM) was filed on August 5, 2014. As shown below, there are now 48 PGR petitions that have been filed. This should ramp up when more and more patents qualify (must be a first-inventor-to-file patent), and especially if Congress reduces the scope of estoppel (eliminating the “reasonably could have raised” language).  Here’s the breakdown of the 6,510 AIA petitions (5,956 are IPR) filed as of February 28, 2017: 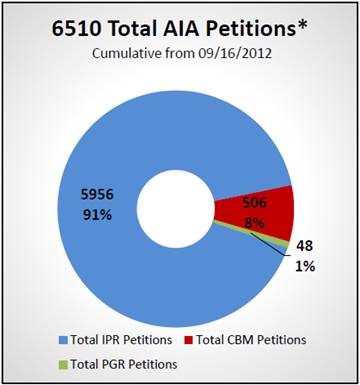 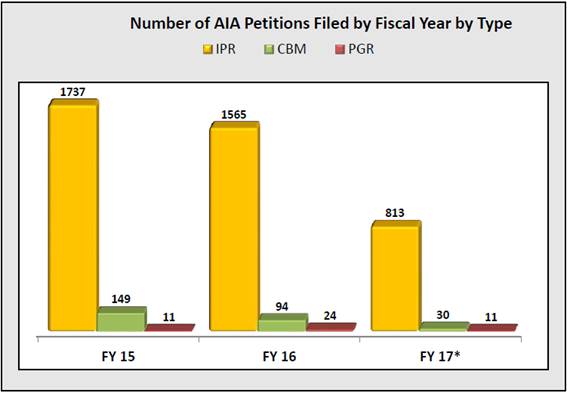 To break down the filing trends for IPR, CBM, and PGR separately on a monthly basis for the last two years, here are the graphs provided by the PTAB (note that the new fiscal year for the USPTO starts every October 1st). The IPR filings have been steady and relatively high in the past 2 years:

In the first phase of an AIA trial, the PTAB determines whether or not an IPR, PGR or CBM will be instituted.  The PTAB may not authorize the IPR unless the petition and response shows there is a “reasonable likelihood” that the petitioner would prevail with at least one of the challenged claims. The institution of a PGR/CBM trial requires an initial threshold requirement of “more likely than not,” which may be the same or slightly higher than the IPR threshold standard. However, the latest statistics clearly show that the initial threshold has been met the majority of the time.  Below are charts depicting the filings for IPR, CBM and PGR, respectively, clearly indicating that the majority of filings lead to institution in IPR, but the trend seems to be reversing for CBM (as of 02/28/2017): 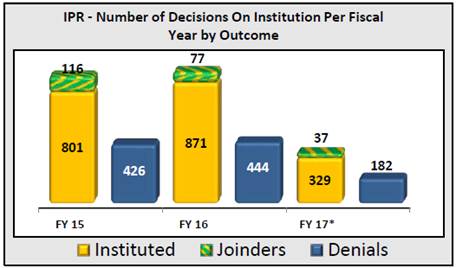 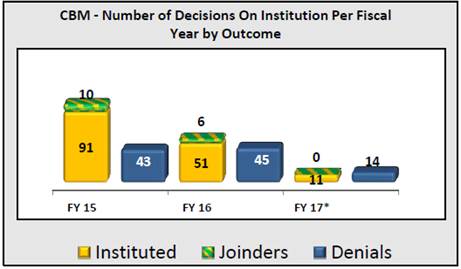 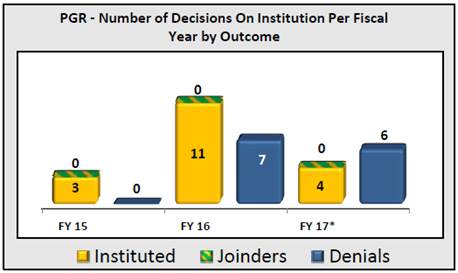 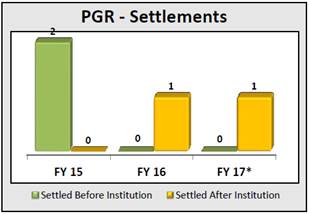 The real question is what happens to those claims once there is institution.  Of the 2,276 trials instituted, 1,474 proceeded to final written decisions, and 989 (67%) of them had all claims found unpatentable. 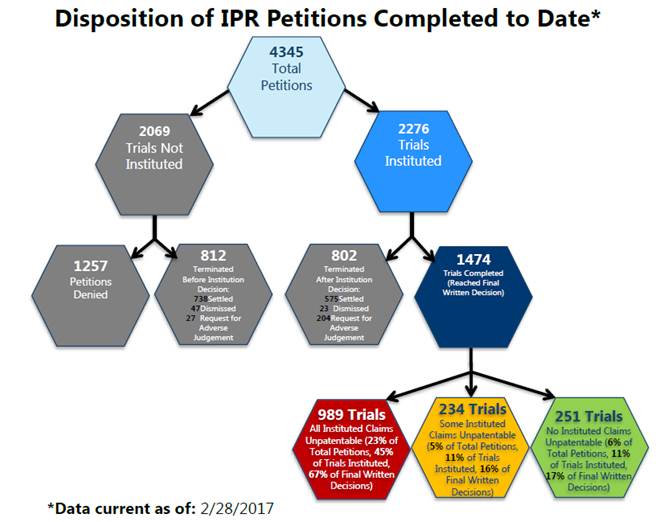 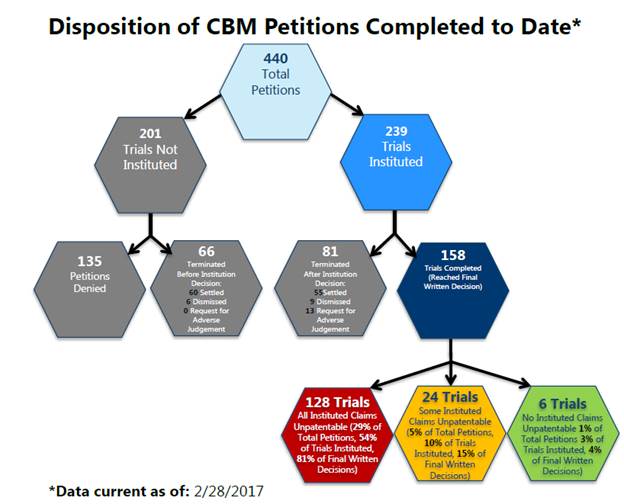 The breakdown of petitions by technology is shown below. The majority is in the electrical/computer/software arts (but bio/pharma has increased, partially due to the hedge fund filings attacking pharmaceutical patents) (again as of 02/28/2017). Fiscal year filings for 2015 and 2016 are also shown below: 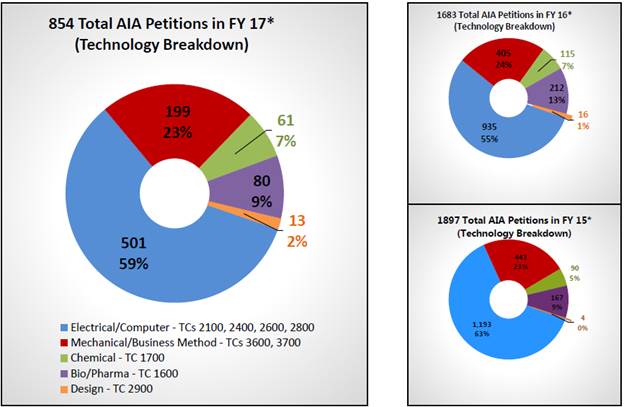 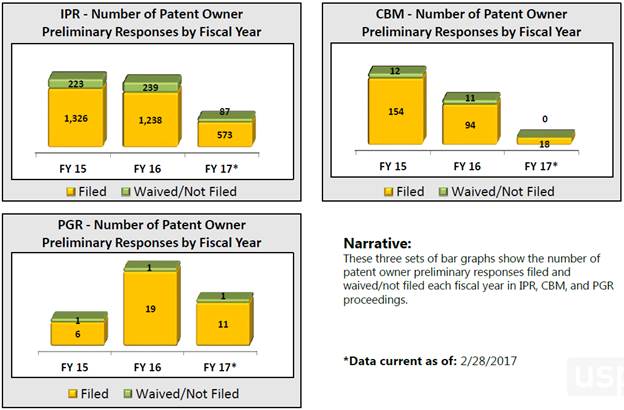 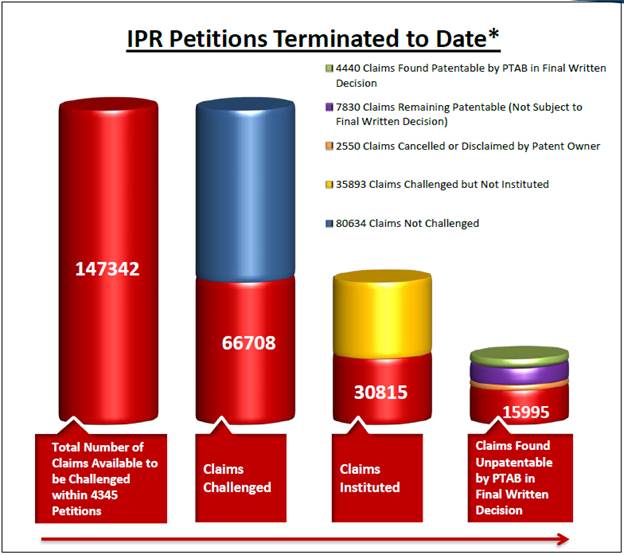 Left, red bar: total number of claims available that could be challenged in the IPR petitions filed (147,342 claims)

Right, multi-colored bar:  See description above. Completed trials include a final written decision, denial of institution, settlement, request for adverse judgment or dismissal.  Here, the purple likely indicates termination due to settlement, adverse judgment or dismissal, where there was no final written decision (FWD). Green are those claims found patentable in a FWD (4,440 claims out of 30,815 claims instituted or 14%). In total, 12,270 claims remained patentable after the completion of the proceedings out of 30,815 instituted (40%). 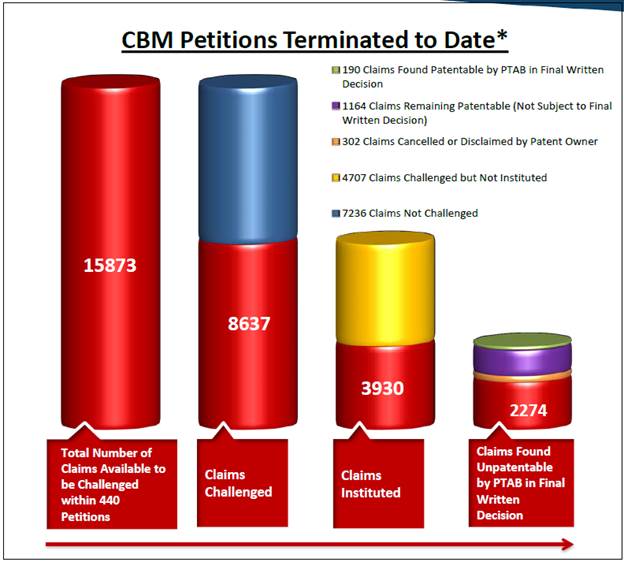